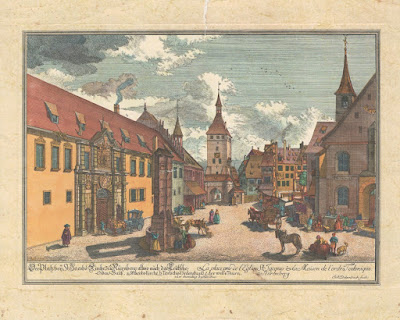 Today, on August 8th, in Augsburg, Germany, the city that my mom and I were born in . . . annually celebrates the Peace of Augsburg.

When I was thirteen years old, mom and I visited Augsburg and celebrated Christmas with my Oma, Opa, great-grandmother, cousins, aunts and uncles . . . it was an experience of a lifetime. I visited the Perlachtrum, a bell tower that was built in 989, originally a watchtower. Today, you can see the Perlachtrum on the live web cam and the city getting ready for the Peace of Augsburg Festival and feel as if you are there.

SNGF and Past and Present Photo Challenge ~

I decided to join in on Randy's SNGF and Denise's Past and Present Photo Challenge today. Since I had already submitted my, Past and Present photo for the challenge on my Our Life in Photos by Ginisology blog in Dear Photograph style, I also wanted to join in on the "genea-heirheads" Saturday fun here . . . . so, if you are up for a fun challenge (and it was a challenge), your mission, if you decided to accept is to:

1)  Review Denise Levenick's (The Family Curator) three blog posts on the Present Photo Challenge. World Photography Day is coming up Aug 19, and this seemed like a fun thing to do something genealogy-wise.


*  Past and Present Photo Challenge details

*  Five tips for snapping the perfect Dear Photograph Picture, by, The Family Curator. 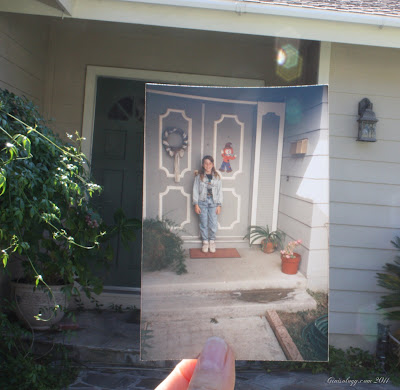 My daughter on her first day of school at our front door then, and now, she will be teaching children in 2011. 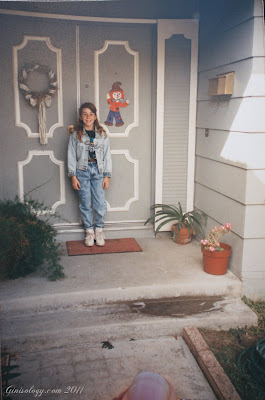 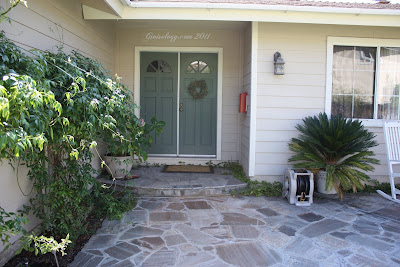 Our front door today in 2011
This was not an easy project to do, the photo used, was the best out of many photos I took in every way I could muster . . .  and with two different Canon cameras. This will take a bit more practice but for now, I am using this one for the photo challenge  The Past is Present: Genealogy Photo Challenge For World Photography Day.  that, Denise Levenick issued to us geneabloggers, genealogists, and family historians on her blog, The Family Curator.
Here's how you can participate ~
The Family Curator is issuing a challenge to geneabloggers, genealogists, and family historians! Celebrate genealogy and family history for World Photography Day August 19 by combining the past and present in a photograph. You might want to recreate an old photo or bring the past to the present day in DearPhotograph style.
Post your photograph with descriptive caption on your blog and send the link to The Family Curator no later than 6am PST 15 Aug 2011. I will post a round-up article of contributions on or before August 19, World Photography Day.
Get creative and have fun!