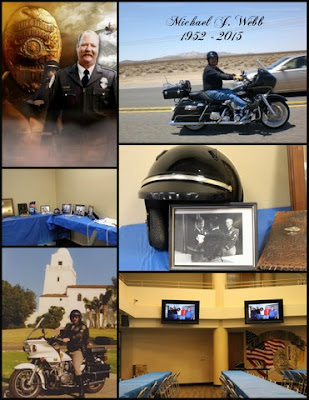 On October the 24th, 2015, yesterday, we celebrated the life of my brother-in-law, Michael. The service was truly a celebration . . . many friends, fellow officers and family came together to honor him . . . I know Michael would be very happy with how it all turned out . . . there were so many that all of us haven't seen in years but it was like yesterday. There were tears, laughter and love through-out and I know that is what he would have wanted. His memory will be kept alive because he is in our hearts always. Rest in Peace dear, Micheal. 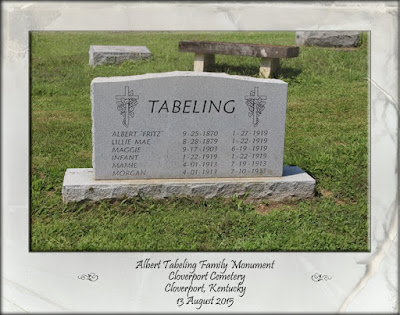 In Sweet Remembrance of my Beautiful Mom ~ ♥ 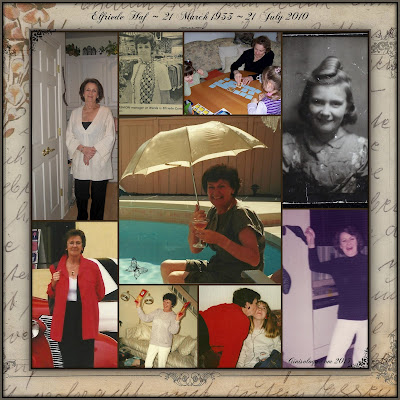 Today, marks the fifth year since we lost mom . . . hard to believe this much time has passed. I say the same thing every year at this time, that no matter how much time goes by, it still feels like yesterday. Every moment is very clear and time doesn't change that . . . I still have that ache in my heart.

This year, I picked photos for her memorial collage that I thought brought out how mom lived her life . . . she was fun, happy, content, full of spunk and love and wiser than anyone I have known. She loved life.

There are a few photos that I know she would rather I not share but, as I looked through them, they brought such a smile to my face and heart . . . they are just so "her!" There were so many more but for now, these say it best.

The special bond of Mother and child is written with love on their hearts and souls and make them a part of each other forever.   ~ Author unknown 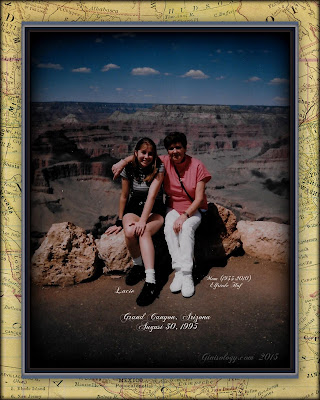 Slowly, we have been moving back into our home after living in our RV for over four weeks due to a leak from our old refrigerator. The flooring in our entire home had to be replaced. As I put my genea-office back together, I am reorganizing, scanning, and getting rid of things I don’t need any longer.

I came across this sweet photo of my daughter and my mom, Elfriede Haf (1933-2010), sitting on the rim of the Grand Canyon in Arizona, in August of 1995 . . . it was a wonderful trip. This summer we are taking a road trip in our RV across country to visit my eighty-four year old aunt in Louisville, Kentucky.  Our first stop . . . the Grand Canyon, I would like to find that same spot and take a photo with my daughter.

Heading out of Arizona, we will then travel on over to Rowlett, Texas, stopping to visit family there. As we travel thru the different states, we plan to take our time and sight see until we get to Missouri, to visit more family . . . and then onto Kentucky.

In Kentucky, I have quite a few family history trips planned. Several of our Tabeling’s that passed away in 1919 from the Spanish flu, are buried at the Cloverport Cemetery together in one plot . . . they have never had a marker for their grave. My aunt and cousin purchased a headstone for them and it was recently installed. My aunt and I will be taking a trip to Cloverport to see that new headstone . . . so grateful that they now have a marker on their grave. I have a few relatives buried at the famous and beautiful Cave Hill Cemetery there in Louisville, so I plan to visit that cemetery also.

Looking forward to getting out of Dodge, taking lots of photos, and making lots of memories to keep and hold onto. 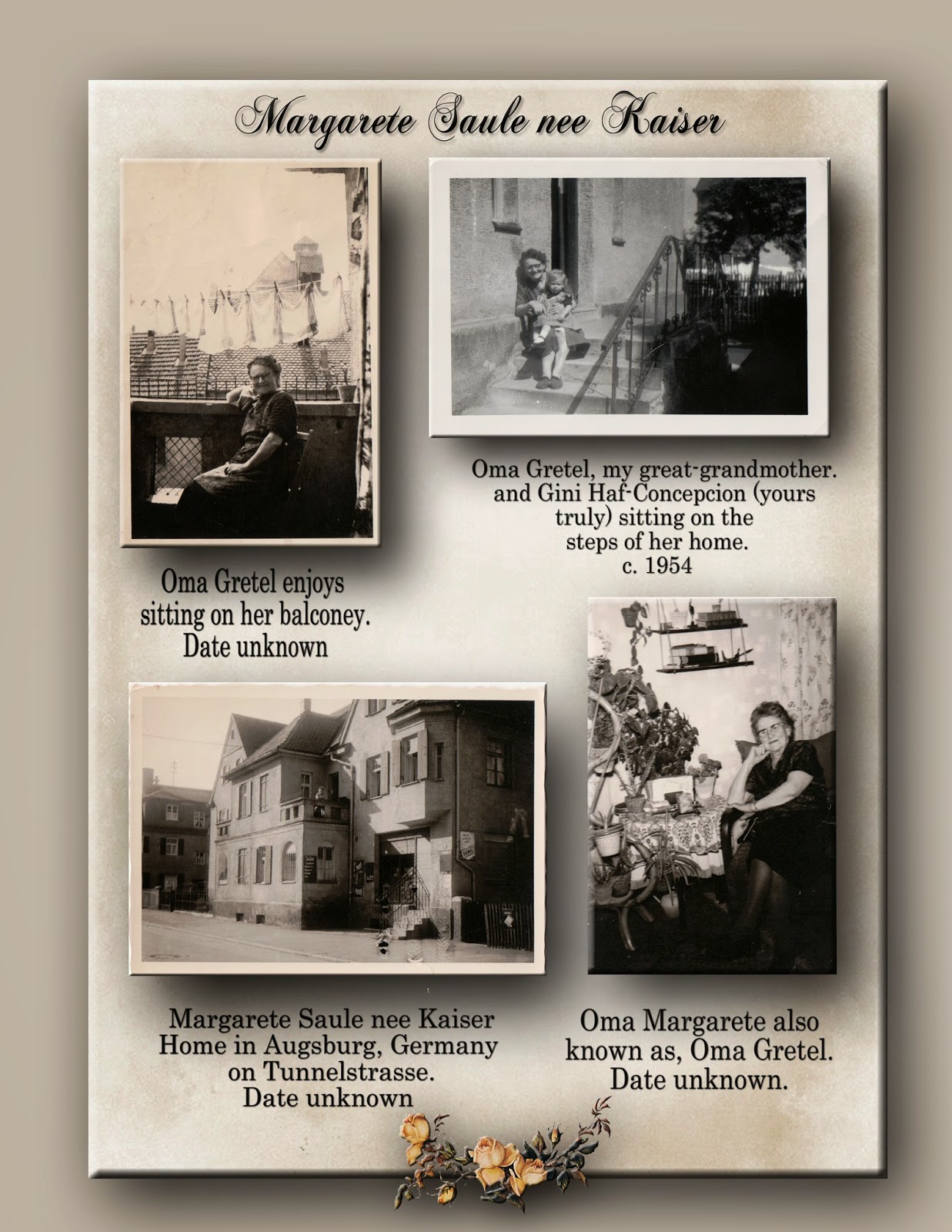 As I created this page for the book I am putting together on my maternal Haf~Kaiser, line, I recalled the few wonderful memories of my great-grandmother, Margarete, aka Gretel. She was a very small framed lady . . . always very warm and loving to me . . . I am so glad that I was able to know her in my lifetime. She had such a sweet smile. I love these photos of her home and how I was there when I was little.

When I was three, mom (1933~2010) and I left Germany, I didn't see my great-grandmother again until 1967 at Christmas time and it was a most memorable time indeed . . . memories to create more pages for my book - I hope to share those pages from time to time here on my blog. 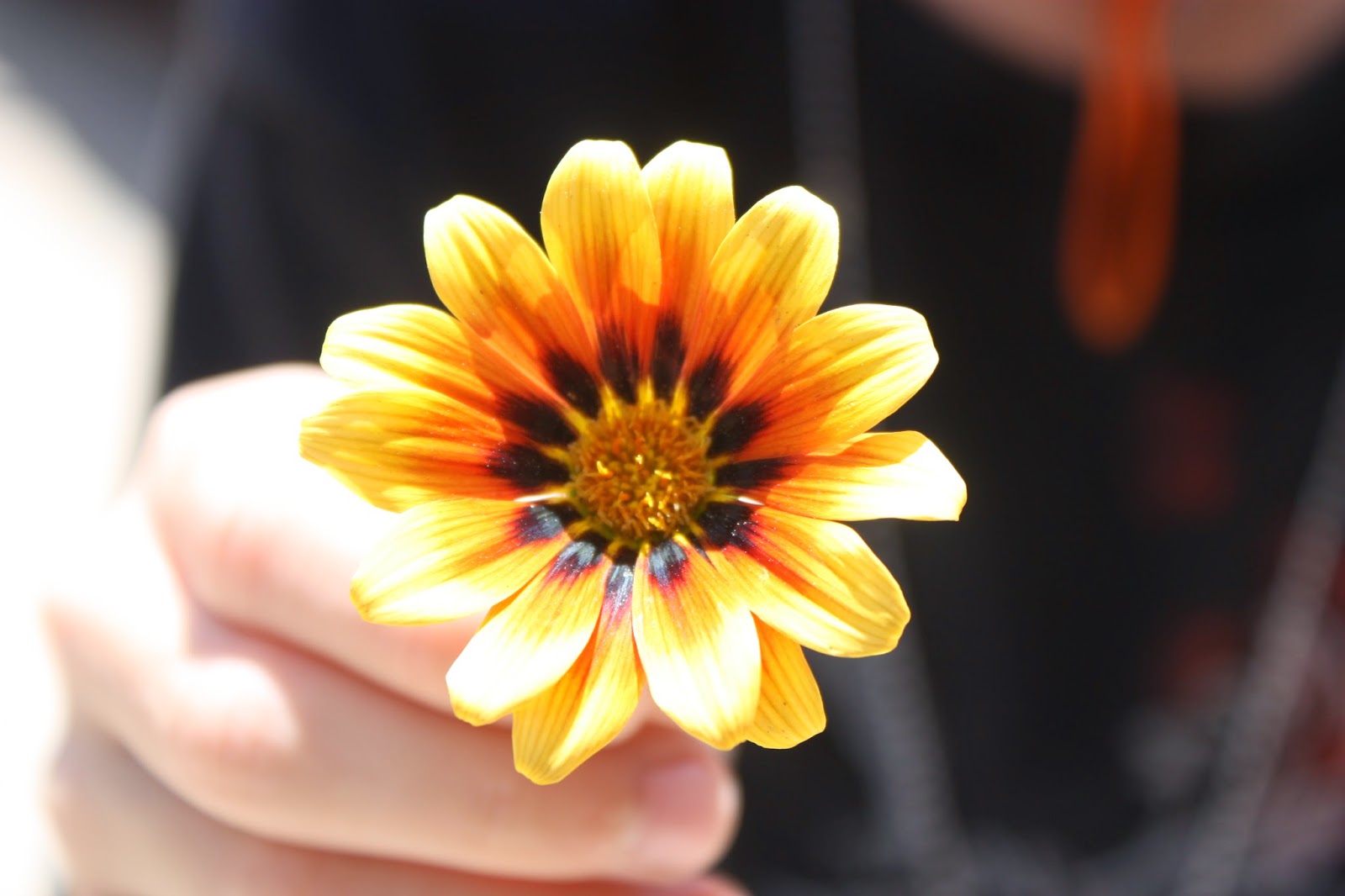 On this day, in 2009, I started Ginisology, you can read all about opening day on my → first blog post. I was pretty nervous! It's hard to believe it has been five, correction, six years since I started Ginisology, time has passed so quickly. I had big blogging dreams for the last five, I mean, six years, but as non-genealogy life stuff happened, I didn't blog as much as I would have liked. I appreciate all my genealogy blogging friends that haven't given up on me, continued to visit and left comments for me with the few posts I did manage to get out there.

I am currently working on a book in Blurb, documenting my maternal line . . . most of which are only photos and that's okay but I sure would love to know more of the stories. I hope to blog some of those pages as I go along . . . Ginisology will always be a place where I want to leave and share my family history discoveries.

Thank you all for the support you always give . . . I have met the most wonderful people because of this blog and the love of family history.

In Memory of Dad ~ 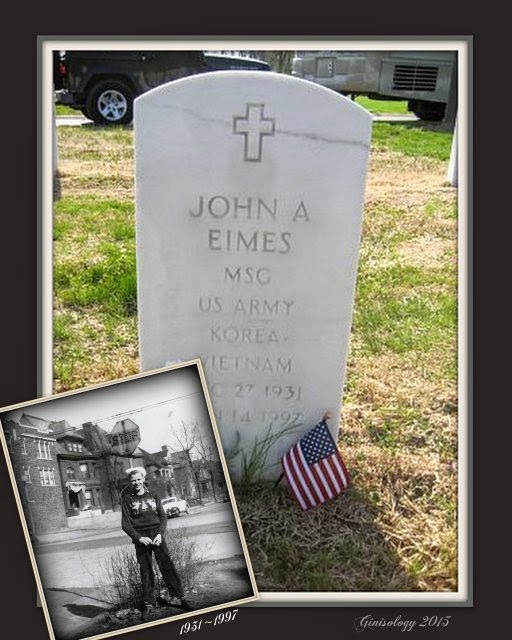 Eighteen years ago today, my father, John Adam Eimes passed away at St. Johns Mercy Hospital in Creve Coeur, St. Louis, Missouri. His final resting place, next to my late brother, Michael (1974-1992), is at the beautiful Jefferson Barracks National Cemetery in Lemay, St. Louis, Missouri. My dad left behind many that love and miss him and who are so very proud of him. Rest in Peace, dad . . . .