the Bound for Mom blogging mini-series Carnival, hosted by geneabloggers.


The Vehicle: a blog carnival consisting of a mini-series of posts over a four-week period based on stories about your mother (or your grandmother or another female ancestor) gathered from family members.

March 25th – A Journey of Firsts: Moms go far and along the way there are so many “firsts” such as first date, first love, first home, first child, and more.


This is my first Carnival...

My Mom is a woman of many firsts, some easy some very difficult. I will start from the beginning:

My Mom was born and raised in Augsburg, Germany. When my Mom was 18 years old, she met my natural father John Adam Eimes, who was in the U.S. Army and stationed in Germany. After 3 years of their relationship, when I was six months old, my Mom and my natural father parted ways; this would be her first devastating heartbreak.

Several years passed when my Mom met John, who later became my Stepfather. He too was in the U.S. Army and soon after they had wed he had received new orders. He was to be stationed with the 5thInfantry Division to Monterey, California USA, I was then about 2 ½ years old. This would be an enormous first for my Mom, leaving her family and home in Germany for the first time ever and beginning a journey to the United States, with many firsts to follow.

My Mom and stepfather with me in tow boarded a train and left Augsburg, Germany bound for Bremerhaven, Germany. Bremerhaven is a port in Germany where many left their homes from and sailed to many other parts of the country to start a new life. 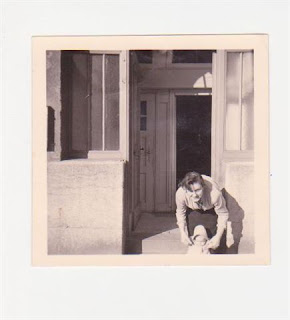 Bremerhaven is on the opposite end of Germany from Augsburg and requires an 18 hour train ride to get there. When we arrived there we first had to go thru a medical check to be sure that we were healthy and well enough to board the ship for travel. I was sick with a common cold and a high fever. Due to my illness we were forced to stay in a hotel near by for a few days. According to my Mom we almost missed our ship! 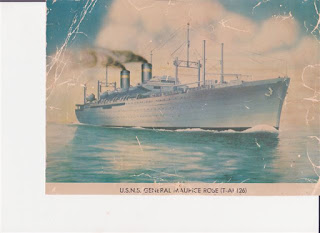 On the day our ship was leaving fortunately I was well enough to travel and we were able to board our ship, ‘The General Maurice Rose’. After traveling on the ship for 9 days we arrived in Brooklyn, New York and stayed with my Mom’s cousin for 3 days. We then boarded yet another train and headed to Monterey, California where we located housing and lived for several years. Eventually we moved to San Jose, California where I grew up. Then when I was about 13, my Mom and my Stepfather divorced.

My Mom became a naturalized United States Citizen. Her belief is that if you live in the United States that you walk and talk as an American. We both became Americanized very quickly; she still has some of her German accent though.

My Mom went to work for ‘Montgomery-Wards’, which was her first job in the United States. She started out as a sales girl in the Woman’s Fashion Dept. Later she went on to be the first woman to become a District Merchandise Manager in the history of ‘Montgomery-Ward’s’. She continued to climb the ladder to a Corporate Regional Executive Manager’s position and was very successful up to her retirement 35 years later.

Mom was single, confident and self sufficient for 30 years and then 9 years ago met the love of her life and married him…she is living happily ever after and enjoying life to the fullest. Mom is an incredible woman with a wonderful and a wise soul…she has had a lot of firsts and is an inspiration to me, our family and many others.
Posted by Gini at 7:45 PM

Gini
Thanks for sharing some of the firsts for your mom. Yes, it would have been quite the experience to leave Germany for a new and different life in the United States, not knowing anyone but her husband and you. I wonder what she was thinking as you sailed from Bremerhaven.

Thank you Janet and you are welcome, I wonder that too, I am going to give my Mom a call this evening and pick her brain and post it! It had to have been very emotional.

Keep up the search,
Gini

Thank you for sharing this inspiring story of your mother. I look forward to the next blogs about her.

She sounds like quite the lady. Very gutsy. Thanks for sharing her with us. I look forward to reading more about her experiences as a young wife and mother.

Ah, Judith, you always make my posts worth while, I love to hear from you and thank you for your wonderful words! It did take a lot of guts and strength, that is my mom. She is a pretty special lady. Thank you my friend for being there for me.