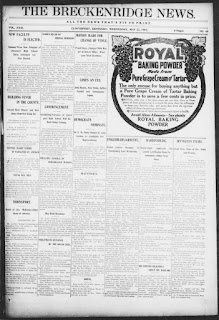 Greetings Gini, thank you so much for stopping by my site and connecting with me last week; I truly appreciate this connection with you. I find your BRECKENRIDGE NEWS features to be very interesting and give readers a sense of what life was like for those in your family tree. Great information indeed. Again, thank you!

You are very welcome, Liv and thank you for your wonderful comment and stopping by here. I am so glad the Breckenridge News is helpful and interesting. I love reading about my ancestors and what their daily lives were like . . . I wish this were done still today with our newspapers for the future generations.