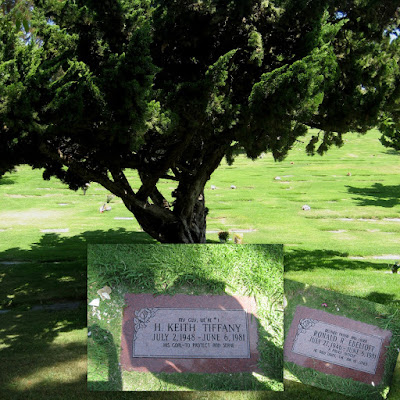 
My husband had introduced his sister to Keith, they fell in love and were married just a short time after meeting each other...they were only married for six months when Keith was taken.

Such a wonderful tribute! So sad though...Thanks for sharing.

Gini, What a tragic end -- some madman just losing it and killing two young officers -- over a rosebush! June 6th is also the anniversary of my grandfather's birth (an opposite anniversary of your sad tale) He's be 122 this year. It's also the anniversary of D-day, 1944.
I'm glad to have found your blog. I lived in Munich my senior year of college and one of my best friends was from Augsburg. I just met him for dinner two weeks ago as I was visiting Stuttgart and Alsace for family research (My German ancestors left Elsaß (as Germans call it) 1770 for Transylvania, whence my grandfather emigrated to America.
I'm sorry for your family's horrific loss 3 decades ago. Thanks for following my blog!

Thank you, Cheryl and Linda for stopping by. Linda, that is wonderful that you lived in and were able to experience Germany - Munich is wonderful and Augsburg, my home town is full of history and very beautiful. I want to go back someday! How I would love to sit and chat with a fellow Augsburgian (made my own name up!). Thank you for visiting my blog and sharing some your family history with me also. German history is amazing to say the least.

Hello, what a tragedy. I am a public safety officer and stay at hotel circle a lot in SD mission valley. The 5 minute drive to linda vista Crandall St, and salute them both